The sky of the future, where safe and efficient co-existence between drones and planes will happen, is closer than ever. World ATM Congress will bring the opportunities and challenges of this new reality by incorporating the drone industry for the first time through Expodrónica Pavilion, thanks to the collaboration of UMILES. “Aviation is entering a second golden age,” claims Ken Carlisle, World ATM Congress director, who also adds that “its future is built through dialogue, cooperation and the construction of a common space.”

The director of Expodrónica, Isabel Buatas, highlights that “Expodronica is the window to unmanned aviation, where attendants and exhibitors will approach three main trends: the solutions offered by companies in the industry, the challenges faced by cities in this new era of mobility, and the creation of sustainable business models associated with this new mobility, such as logistics and passenger transport.”

World ATM Congress also announces the collaboration of UMILES, the largest remotely piloted aircraft service provider in Spain. For Carlos Poveda, CEO of the company, “the new trend of electrification in manned and unmanned aeronautics is the necessary evolution of this constantly evolving sector”. Poveda adds that this alliance between the World ATM Congress and Expodrónica represents a step towards total and continuous integration. “We can all live by the highest standards in safety and efficiency “.

This next edition of the World ATM Congress, organized by the European Civil Air Navigation Services Organization (CANSO) and the American Air Traffic Control Association (ATCA), will gather 253 exhibitors from 135 countries and more than 250 talks featuring the leading global experts in the aeronautical sector.

The World ATM Congress and Expodrónica will show a complete programme of conferences and exhibitions focused on the future of flight and the integration of advanced air mobility (AAM), UAS air traffic management (UTM), autonomous and remotely piloted air vehicles (AAV / RPAS), the most innovative air traffic management (ATM) systems and other services related to drones or advanced mobility systems (AAM).

Expodrónica’s participation in the World ATM Congress will help the aviation industry learn first-hand the latest unmanned applications in rescue, emergencies, agriculture or the audiovisual industry.

Expodrónica Pavilion at the World ATM Congress will gather one hundred companies and organizations at the drone sector to offer a complete programme of conferences that will take place at the Expodrónica Theater.

During the first day, the Theater will host debates around topics such as the use of drones in the armed forces in times of peace, crisis and conflict, with the participation of Michael Callender, head of the NATO Air Resources Section, and Christophe Vivier, director of the Single European Sky of the European Defense Agency.

The integration of air mobility operations, one of the great challenges facing the UAM and ATM sectors, will be the main topic of a round table with the participation of Parimal Kopardekar, director of NASA’s Aeronautics Research Institute (NARI); María Algar, head of the Drones Program at EASA (European Aviation Safety Agency); Antoine Martin, General Director of Civil Aviation at the French National School of Civil Aviation and Maurizio Trezza, head of the Department of UAM and UTM at Everis.

Representatives of the Air Force, INTA, INDRA, Babcock, Satlink and System Group will analyze the application of large UAS projects. In addition, UMILES, Atlantic Singular Aircraft and EHang will share the latest advances in unmanned aerial systems for the transport of goods and passengers.

The public security response to threats from drones will be the topic of conversation between representatives from the Spanish National Police, the Civil Guard, the Secretary of State for Security of the Ministry of the Interior and the Professional Soccer League, La Liga, as representatives of big sporting events.

More than 50 executives from large companies and institutions will complete the program. They will approach the preparation of cities for the integration of drones in the urban space; the increasing use of drones in artificial intelligence and the industrial sector; the regulatory and certification strategies, as well as the European drone employment strategies related to UN drones. Participants will also discuss  the relationship between drones and 5G.

Expodrónica will also host demo flight exhibitions at IFEMA during the days of the event. Exhibitions requiring more space to be deployed will take place on the afternoon of October 28th at Cuatro Vientos Aerodrome.

Attendance at the World ATM Congress is free for professionals and press accreditations are already open at www.expodronica.com

NEWS AND EXHIBITIONS DURING THE PRESENTATION

The agreement between World ATM Congress and Expodrónica served as the backdrop for the presentation of some of the most innovative drones in the sector, which flew for the first time in a space dedicated to manned aviation.

After the introduction, UMILES, the largest remotely piloted aircraft service provider in Spain, carried a flight demonstration of the Saturn drone, a 100% Spanish-made unmanned aircraft, designed for security and safety operations as well as mountain rescue.

DJI: A drone to fight the pandemic

DJI ARS MADRID and SMARTGO Solutions introduced the latest drone developed for precision farming. DJI AGRAS T30 drone, with a 3 meters-long wingspan, carries a 30-liter tank capable of spraying areas of up to 16 hectares per hour that has already been used experimentally by the UME (ER Spanish Force) for the spraying of large areas during the COVID-19 pandemic. 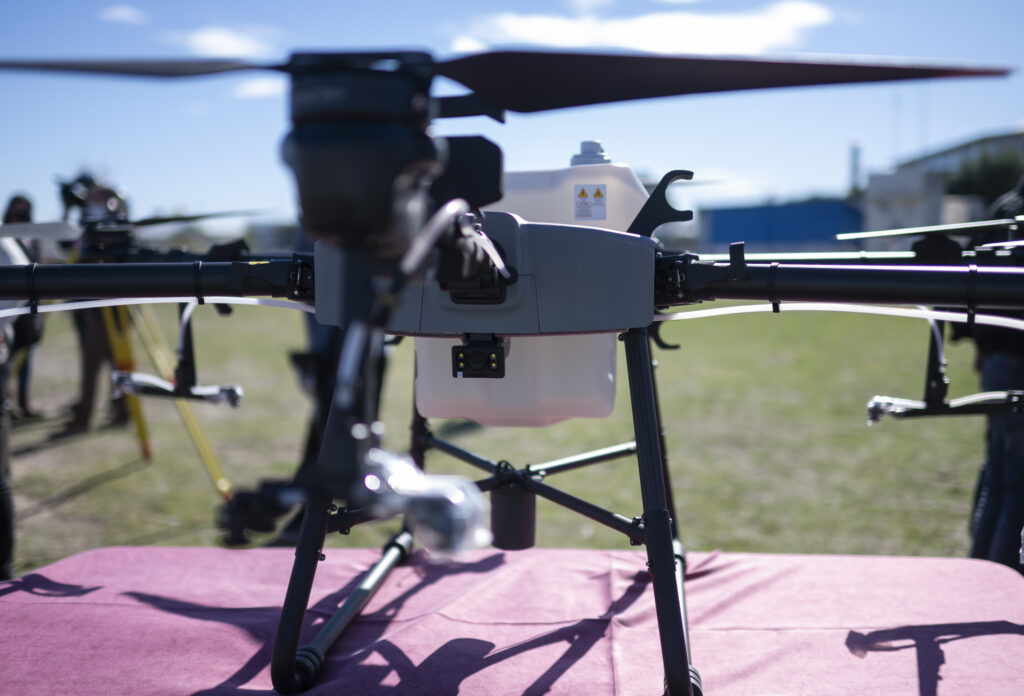 Attendants were able to see, for the first time in Spain, the autonomous aerial vehicle (AAV) EH216 manufactured by EHang. An air taxi that is already being used to carry people autonomously in China. The Chinese firm EHang is one of the world leaders in the design and manufacture of drones and the first to be listed on the Nasdaq index in New York.

During the presentation, EHang and the Spanish National Police announced their collaboration to explore possible use cases in emergency and security missions.

The Chief Commissioner of the Air Resources Unit of the National Police claims that, as a result of the collaboration with EHang and the Valencia Technical University (UPV)  “all the necessary steps are being taken to identify the use cases and define the R&D methodology that will allow this Autonomous Air Vehicle to fly”.  “We believe that it will be very useful for emergencies and security, in missions such as fire extinguishing, access to contaminated areas (Nuclear, Radiological, Bacteriological or Chemical Risk), landing in confined areas, transport of material, and any police service that may require the use of sensors.” The use of this technology puts the National Police of Spain at the national and international cutting edge in the Police use of this type of aircraft.

About Expodrónica at the World ATM Congress.

Expodrónica was established in 2015 and has since attracted over 6.000 drone and AAM experts. Merging with World ATM Congress this year, Expodrónica will bring over 70 exhibitors and two and a half days of conference programming to IFEMA in October.

The 2021 edition of the World ATM Congress aims to diversify its exhibition and programming scope by welcoming new, emerging industries that participate in the evolution of global airspace as a complement to new operations and commercial objectives. Organized by the Civil Air Navigation Services Organization (CANSO), in collaboration with the Air Traffic Control Association (ATCA), the World ATM Congress represents the largest air navigation event, which brings together executives and technicians in the sector. The fair includes the latest trends and advances related to air navigation. It will bring together professionals dedicated to air traffic management and leading international companies in aircraft and air navigation systems manufacture. More than 130 different countries and territories will be present in the event that encompasses the entire spectrum of the air navigation industry. Professionals in the sector will have the opportunity to increase their network and close deals on the spot. The World ATM Congress has obtained several awards that prove its reputation among the public.

World ATM Congress is also proud to announce a new collaboration with UMILES. Founded in 2016 in Madrid with the dream of creating an alliance of international companies, UMILES is a remotely piloted aircraft service provider that includes as its main activity the operation of drones and AAM aircraft, in addition to manufacturing, sales, maintenance, training, technical consulting, and commercial services.

This site uses Akismet to reduce spam. Learn how your comment data is processed.